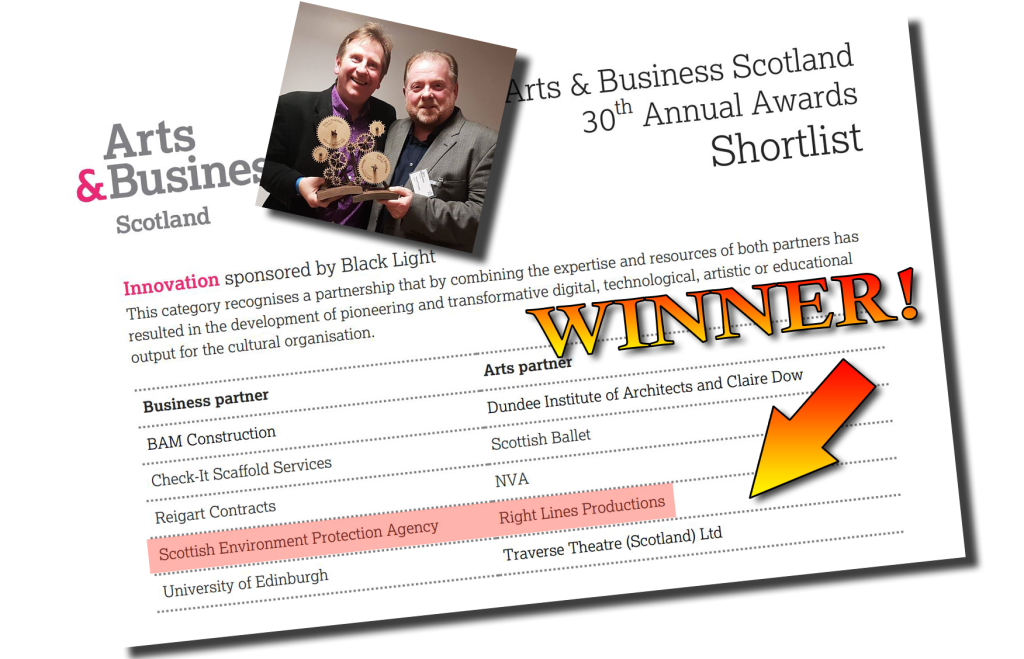 The Isle of Love Project

We are excited to announce that Right Lines has been shortlisted for an Arts & Business Award for our collaboration with SEPA on Rapid Departure – in 2 categories!

This category recognises a partnership that by combining the expertise and resources of both partners has resulted in the development of pioneering and transformative digital, technological, artistic or educational output for the cultural organisation.

This category recognises a partnership that has used the power of culture to engage with and educate people in Scotland’s communities, evidencing the contribution that culture can make to improve health, wellbeing, confidence and quality of life.

We are very pleased to announce that Creative Scotland has  awarded Right Lines funding to collaborate with Glasgow based band Randolph’s Leap! Over the next few months, we will be working with band lyricist Adam Ross to research and develop a new theatre show. With luck (and a few more funding applications…) this will lead to the first ever Scottish indie-pop juke box musical!
Please see http://www.randolphsleap.co.uk/

Latest release on the Hi-wireless platform is Border Control

A teenage couple break down on the Scotland/England border on Referendum Night.  She’s Scottish and he’s English and they’ve run away from their families to get married, as she is pregnant.  Against the backdrop of the evolving momentous political drama, the couple become a metaphor for how the past and future collide.  Border Control is written by Dave Smith and stars Ewan Donald and Helen MacKay.  It is produced by Amanda Millen and directed by Alan de Pellette.

Check it out at  HI-WIRELESS

Buy Distilling Whisky Kisses, the book about the show at our online shop here

Special Offer on “Distilling Whisky Kisses”….buy the book for only £5.00 and get free Whisky kisses souvenir tea towel! 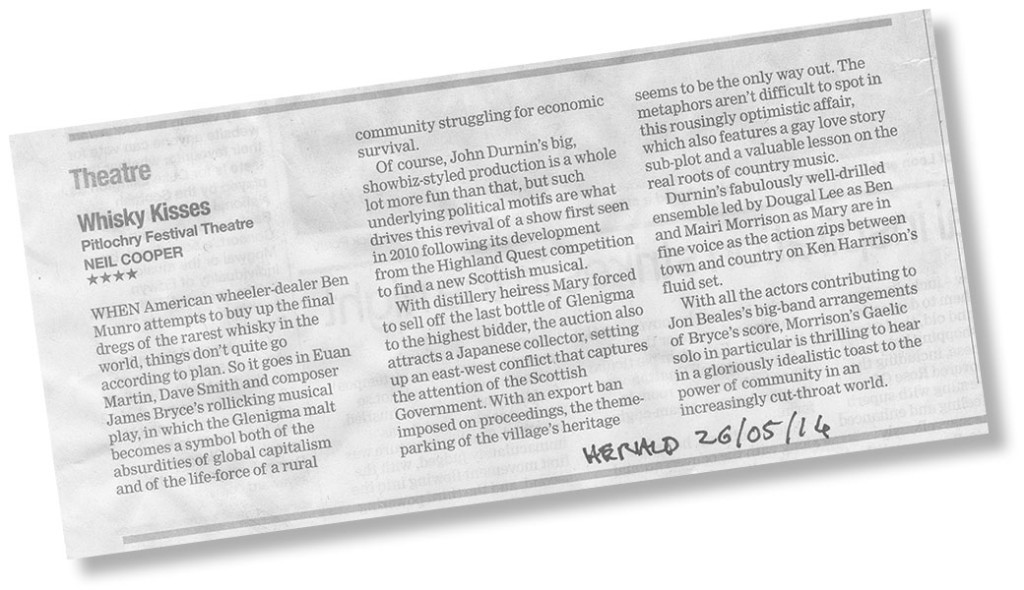 “I will certainly be opening one of my finest 1968 Malts and saying slàinte on your opening night! With best wishes.” Cameron Mackintosh”

We were absolutely delighted to receive permission today to share this personal message from Sir Cameron.  Think that merits a dram in the Whisky Kisses camp tonight! 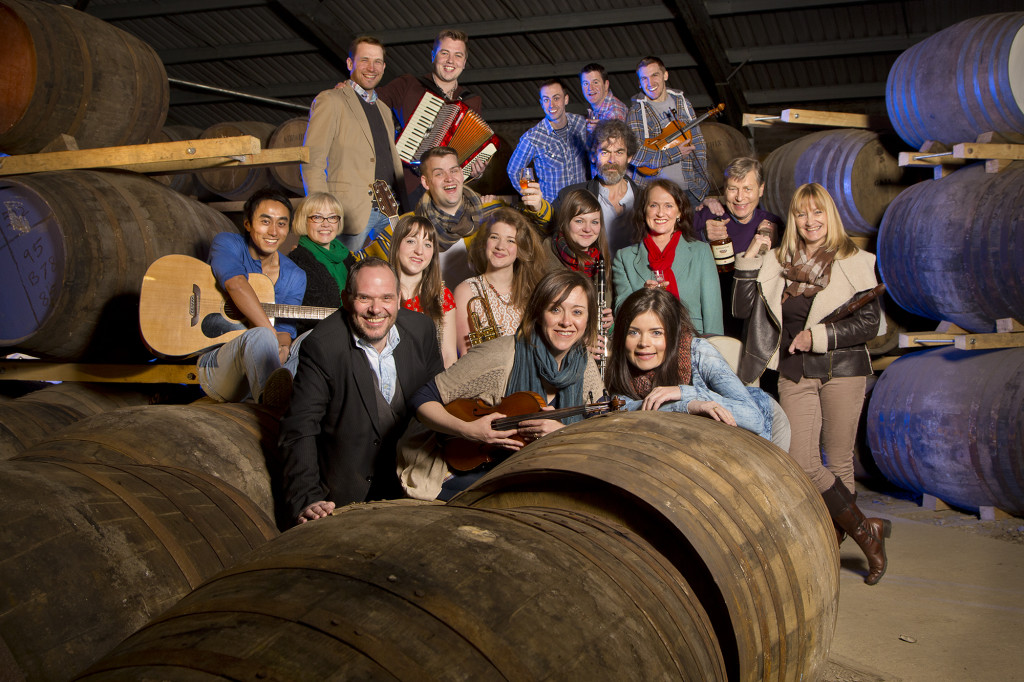 The PFT Ensemble undertake some research in preparation for Whisky Kisses!

All the latest developments from Right Lines Productions…. 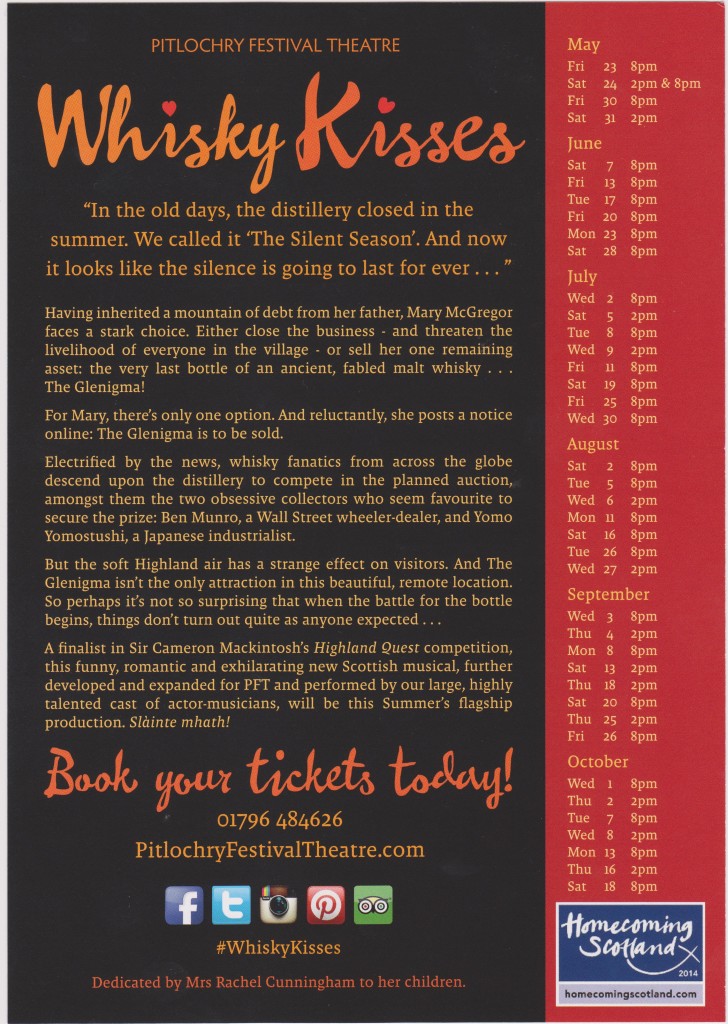 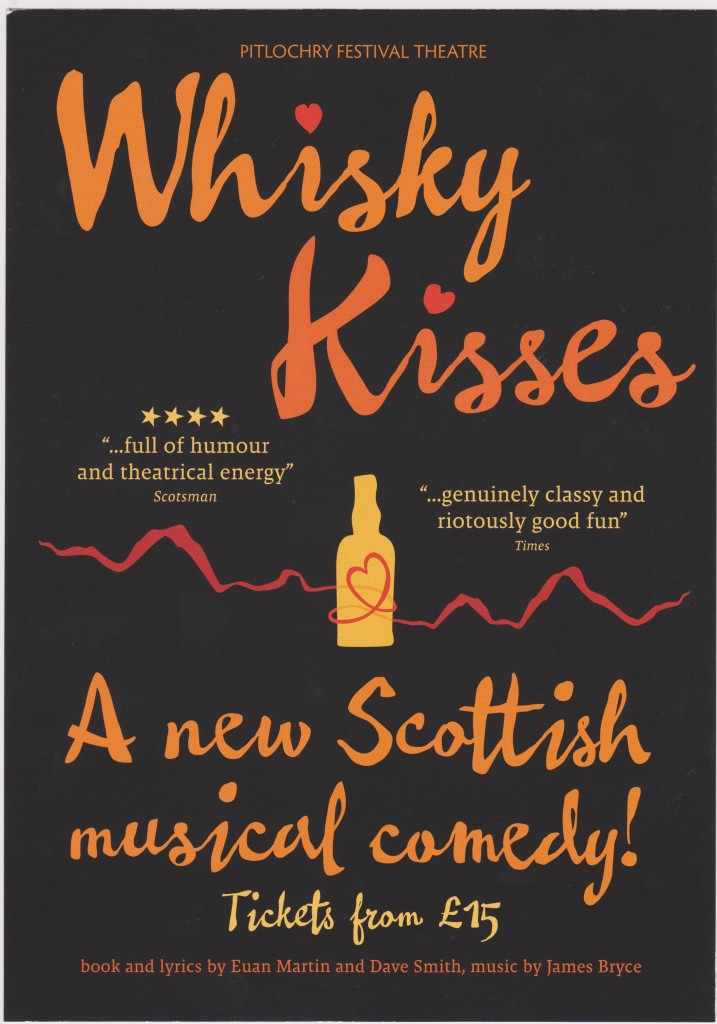 The Summer Season Banners have gone up at PFT 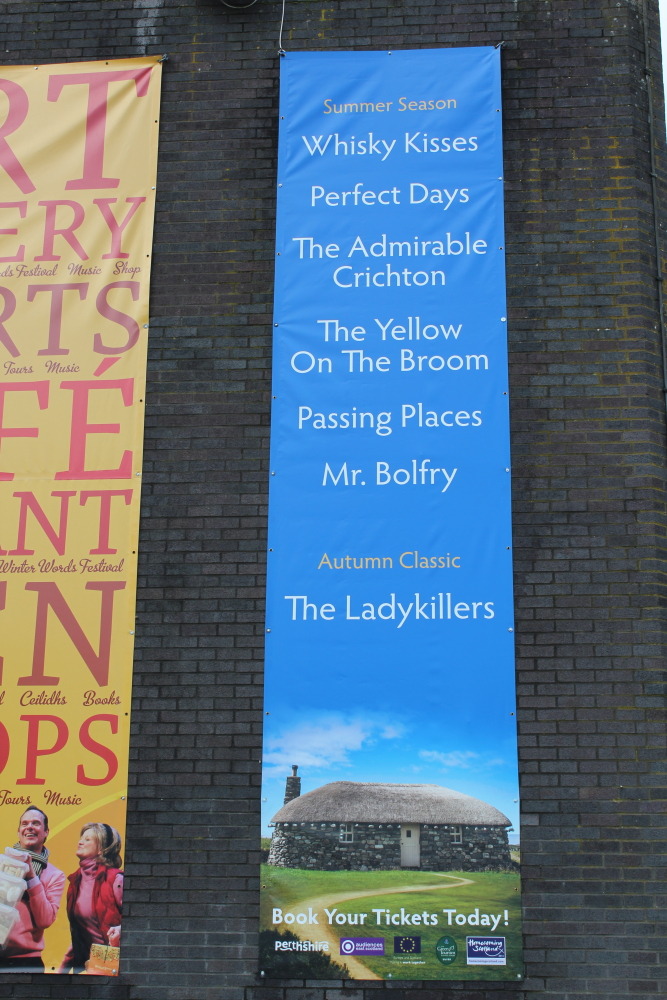 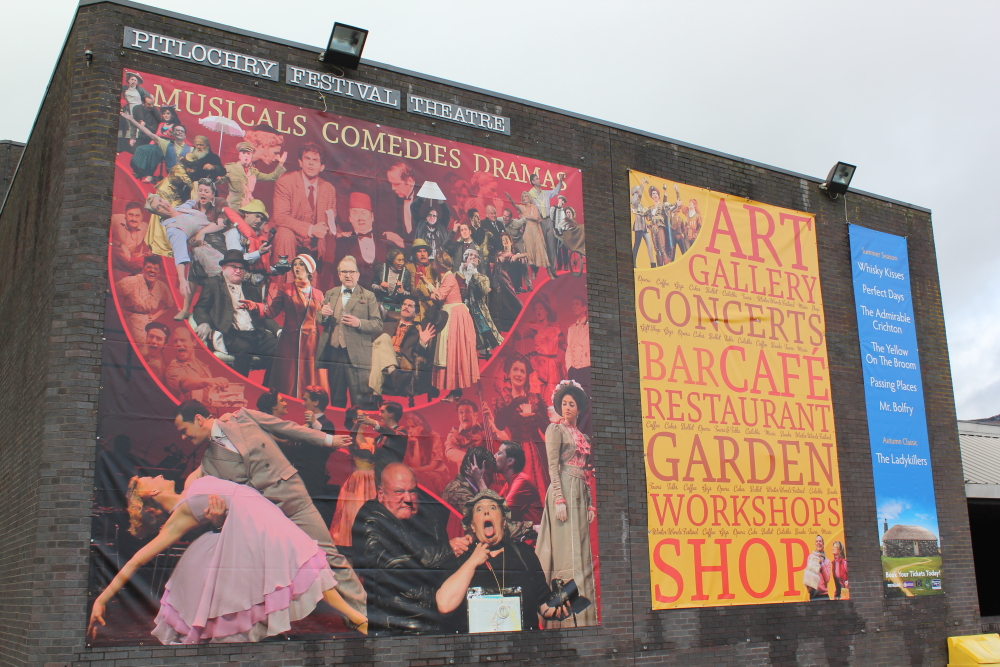 NB: Tickets for the first night of Whisky Kisses – Friday 23rd May – are going very well.  Also, the first two matinee performances of the show are almost sold out!  Book Now!

Audience Feedback on Be Silent or Be Killed –

“A very moving experience.  A powerful story which drew us in completely.  Both frightening and thought-provoking.  Nothing can beat live theatre with such professional actors and writers.  Fantastic!” 5 *****

For more audience comments, see the Be Silent page.

REVIEWS OF BE SILENT

Annals of The Edinburgh Stage

‘Smathsin, the interactive online Gaelic comic, created by Right Lines and produced by Storlaan is now available at www.smathsin.co.uk 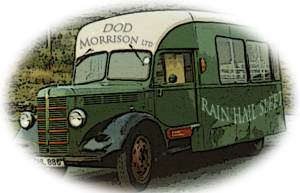 Morrison’s Van is an online Highland whodunit set in the murky world of mobile retail.  Dod Morrison has taken on a reluctant work experience student and is all set to pass on his wealth of experience in the travelling grocery business.  But the first visit of the day to his most loyal customer Dot Cunningham is not the usual banter and barter…  How could she have fallen?  Or perhaps what could have befallen her…?

Excerpts from our Press Release…

“With this new production, we are definitely following a route not previously travelled.  It’s an online radio serial which will be released in four parts on consecutive days: 1st – 4th December 2011.”

“We have developed a strong following in Scotland with our comedy productions which have toured extensively across the country.  However, this time we thought we would extend the service by bringing our comedy products right into people’s homes.  Hopefully folk will enjoy this personal touch!  Of course, Morrison’s Van also gives us the opportunity to develop a world-wide audience for the first time.”

If you are unable to “attend” the world premiere of Morrison’s Van on 1st December, worry not.  The serial, written by Euan Martin and Dave Smith and directed by James Bryce, will be available to download at any time following the initial release dates. 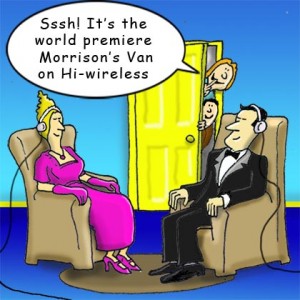 Morrison’s Van is the final section of the Hi-Wireless project which has been running since June 2011.  Thanks to funding from Highland Council’s Literature Fund, Right Lines curated a new writing project for online radio plays.   Five Highland writers were commissioned to deliver five 10 minute radio plays.  These were all recorded at Acorn Audio Studio, Findhorn and released online monthly. All five plays are still available to listen to and download.

We are applying to Creative Scotland for funding for  a new piece entitled Funeral Party.

And as ever, we have numerous projects, plans and ideas in various stages of development awaiting funding, commission, investment or gratuitous financial support.  Please get in touch!