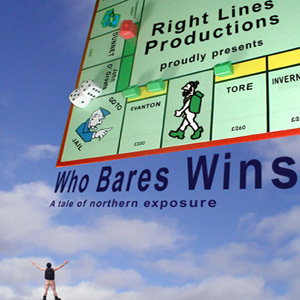 Euan and Dave were inspired by the antics of the Naked Rambler and with the assistance of a production grant from Highlands & Islands Producer’s Fund, they created a new show called “Who Bares Wins.”

The Naked Rambler captured the headlines in the summer of 2003 as he made his way from Land’s End to John O’ Groats completely naked apart from boots and rucksack.

His progress was somewhat erratic however, as he was frequently arrested – particularly around Evanton for some reason – and spent several weeks in prison. He finally completed the walk in January 2004 – not the best time of year to be indulging in northern exposure!

“We were amused by the great comedy potential in the Rambler’s story, but we were also interested in the more serious issues raised by the stop-start nature of his journey North.”
In addition to the arrests and time behind bars, the Rambler was also assaulted, robbed and taken to a Psychiatric hospital for assessment.

Set against the backdrop of a remote community eagerly awaiting the arrival of the Rambler for its own special reasons, “Who Bares Wins” explores society’s wide range of attitudes to nudity in an evening of quick changes and fast-paced comedy action.

The production of “Who Bares Wins” in 2004 featured two actors well-known to Highland audiences. Alyth McCormack starred in Highland Festival productions “The Wedding” and “Seven Hunters” and also toured the Highlands in “Seven Ages” with Dogstar Theatre Company. Alyth is also one of the country’s finest Gaelic singers and tours the world as a solo artist and with her own band.

Ron Emslie has a very impressive list of film and television credits including “The Chinese Detective”, “The Bill” and “Doctors”. He has had a long career in theatre appearing in “Godspell”, “Piaf” directed by Sir Peter Hall and 1200 performances with the original production of “Buddy”. Dave and Euan were greatly impressed by Ron following his performances in the Highland Festival’s 2004 touring show “Miniatures” and this led directly to his casting in “Who Bares Wins.”

The show was directed by Mark Saunders who has created a wide spectrum of theatre in Scotland for many years, both as performer and director. Since 1992, he has been Lecturer in Movement at RSAMD in Glasgow where his directorial work has ranged from Greek tragedy to Panto.

“It was a very talented Team for this production. In addition to Alyth and Ron, we were lucky to secure the services of Mark, with whom we have worked on two previous shows – and having Brian Gorman as stage manager ensured an experienced hand behind the scenes.

“Who Bares Wins” certainly threw up some surprises: some audience members entered into the spirit of things and “dressed down” for the occasion, while one Highland school was so concerned about the subject matter that it cancelled the booking! The best night of the tour was at the Universal Hall in Findhorn when the Naked Rambler himself put in an appearance as guest of honour.