Right Lines is a writer-led production company based in the North of Scotland.

Dave and Euan first met up in the percussion section of the ground-breaking Aberdeen electric ceilidh band The Reel Aliens. After the demise of the band, their paths took different directions, wending through a variety of occupations: social worker, wagon train operative, circus hand, oil worker, ceilidh consultant and theatre designer. 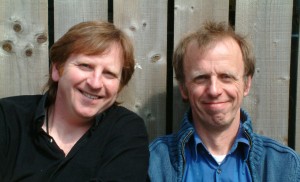 When Dave was searching for a follow-up to his successful Highland Festival commission “Hard Pressed”, a comedy about the aphrodisiac qualities of Islay cheese, Euan dusted down notes for an interactive comedy ceilidh murder mystery show which had been lying in a drawer for 10 years. Their first writing collaboration resulted in “The Accidental Death of an Accordionist” which toured the Highlands & Islands to great acclaim in 2001 and re-toured in 2002. A second interactive comedy, “The Wedding”, was equally well-received during a tour in 2002. Both shows played to sell-out audiences during the Edinburgh Festival Fringe.

The writing partnership is now well-established and following the success of the first two commissioned shows, Dave and Euan formed their own company Right Lines Productions in 2003 as a vehicle for their new work.
The first production as Right Lines was “Who Bares Wins” (2004), a hugely successful farce based on the antics of the Naked Rambler, starring Ron Emslie and Alyth McCormack.

Here is a brief presentation of the company’s work up to 2010, best watched in full screen.