“Man Shed” is a bitter-sweet one-man theatre piece which explores the joy of sheds, the pain of loss and the comfort of friendship. The play has been inspired by Men’s Sheds around the world, but specifically by the work of the Scottish Men’s Shed Association. 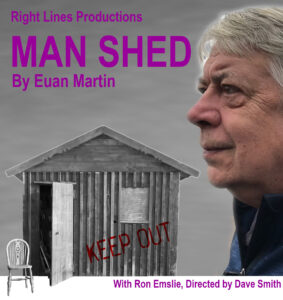 The loneliness of the old is relatively unexplored theatrically. Many older men, especially, are not naturally sociable, and may not recognise or act on their emotional needs. Here, in his shed, a man reflects after the loss of his wife and best friend. He understands his predicament intellectually but this is not helping him to come to terms emotionally. He starts to see that it is loneliness that underpins much else and to take his first steps back into the world via a community ‘shed’. Euan Martin’s excellent script explores the issues with wit and economy and Ron Emslie’s convincing performance brings dignity and pathos. Perhaps not everyone’s first fringe choice, but a must-see which merits a future life.

A man in his elder years paces his garden shed, shredding old newspapers and dipping into his stash of Pot Noodles (chicken and mushroom flavour) for a treat. He talks to himself, and occasionally a visiting friend named Alex, although we hear only the present character’s side of the conversation. A stranger has gently accosted him in the supermarket crisp aisle and noted from his basket that he’s shopping for one – perhaps he’d like to come and visit a ‘men’s shed’ intended for “people like you”?

The idea of a ‘man cave’, a place where men can take themselves off to pursue their innocent hobbies, is an aspirational one for many husbands or partners, but here it has become a prison. In particular, Ron Emslie’s performance of Euan Martin’s script offers a tender study of grief and loneliness, as we learn of the man’s bereavement, his companion Alex’s recent dementia and death, and his only daughter’s life in Australia.

Director Dave Smith has drawn out the tenderness and sympathy of the story, crafting some heart-breaking moments, as when the man’s first house visit of the year is the meter-reader in March. He recounts past conversations with others, but their voices are absent rather than enacted; this leans into the point of the piece, although it also flattens the tone of it somewhat. 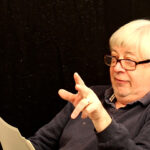 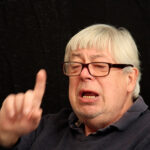 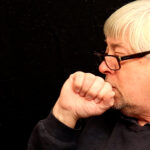