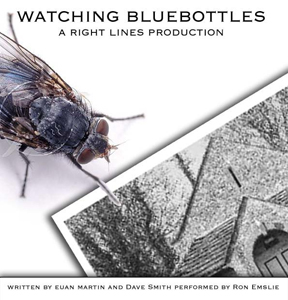 “Heaters, lights, keys…is that me done now?” The old hallkeeper recites his daily mantra as he prepares for one last bash – his own retirement party. After years of service behind the scenes, the hallkeeper turns the tables and takes us beyond the mundane chair-stacking and sweeping up to reveal a world of passion, pathos and life-changing experiences!

“Watching Bluebottles” is a one-man show that evokes the rich diversity of the village hall, situated at the heart of the community. It is the personal story of one man as he prepares to say farewell to the old hall he has spent a life-time maintaining. The audience is invisible as he follows time-honoured routines, recalls tall tales and reveals the dark secrets of the hall.

Ron Emslie returned to work with Right Lines following his incredible multi-role performance in Who Bares Wins. Once again, he captivated audiences with a spell-binding portrayal of the Hallkeeper.

The world premiere of Watching Bluebottles took place at Miltonduff Hall on Saturday 12th March 2005, followed by a short tour in the North East of Scotland. An autumn Highland tour took place between 12th – 26th November 2005.