The Accidental Death of an Accordionist 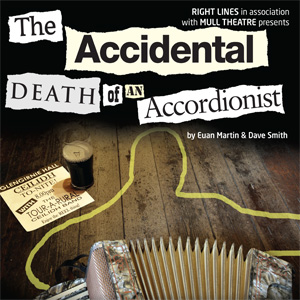 by Euan Martin and Dave Smith

“The red-blooded, rollicking farce that has hit all the right notes on its Highland Tour… simply explodes with raw theatrical energy.”
Joyce McMillan, The Scotsman.

An irreverent evening of singing, dancing, drinking and… murder!

Glengirnie’s holding its grand ceilidh and the village is out in force. Master of Ceremonies for the evening John Angus is loosening up his vocal chords with a couple of drams, Aly the accordionist and the band have promised not to be late, the raffle’s ready, the bar’s well stocked and Jean’s even sold a ticket to the Laird.

But behind the scenes, there’s trouble brewin’!

You’re invited to take your partners for the first dance and join the craic…but watch your back, because just below the surface of this Highland idyll lurks deceit, mistrust, jealousy, hatred and bloody revenge!

From the writers who brought you “The Wedding” (2002) “Who Bares Wins” (2004), “Watching Bluebottles” (2005) and the Musical “Whisky Kisses” comes the revival of the Highland Festival’s most successful commission.

“The Accidental Death of an Accordionist” is an interactive comedy-ceilidh murder-mystery theatre experience that gained instant smash-hit status when it burst onto the Scottish theatre scene in 2001. It incorporates traditional music, song and ceilidh dancing with knockabout comedy theatre, plus that special ingredient – the mysterious demise of two cast members!

A sell-out tour of the Highlands during the Highland Festival in May/June 2001 garnered rave-reviews from some heavyweight theatre critics and won immediate praise from all those lucky enough to secure tickets for the show.
By far the most successful commission by the Highland Festival, “Accidental Death” was also so popular with main sponsors Guinness UDV (now Diageo) that the company put together a funding package to stage a six-performance run at Glenkinchie Distillery near Edinburgh during the Edinburgh Festival Fringe in August 2001. The success of the production was compounded with a complete sell-out of every show and hundreds of enquiries for tickets turned away. As one member of the audience said, “The Accidental Death of an Accordionist” is the Scottish “Mousetrap” – this show should run and run!”